The Harlamert Charitable Foundation Entrepreneurship Competition’s awards breakfast began with a moment of silence for Irv Harlamert. This would be the first year in the competition’s history that Irv was not judging. First held in 2010 by Irv, the competition challenges Oakwood High School students to shadow an entrepreneur and write about what “entrepreneurship” means. The spirit of this challenge was captured by this year’s 20 students’ entries.

After shadowing a business owner, students submitted essays describing their experiences and discussing the spirit of entrepreneurship captured by their subjects. Winning essays were separated into three categories: creator, innovator, and inspired. This year, four students were granted perfect scores by judges and received the honor of “Inspired.” 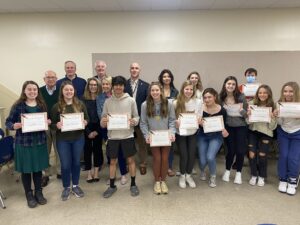