When Oakwood Schools Foundation Trustee Joel Frydman came up with the idea for Philanthropy 101, he was hoping to inspire Oakwood students to give back. Now in its seventh year, the competition is not only fulfilling Frydman’s dream, but is a life-impacting highlight for juniors and seniors in the Oakwood High School class Wall Street 101.“I have lived in Dayton since I was five,” Asher Matusoff, one of the students who participated in this year’s program said. “Throughout this experience, I learned what Dayton has to offer.”

Once again this year, students in Natalie Johnston’s business class had the opportunity to learn about five local charities.  This year’s charities were:  Montgomery County Animal Resource Center, The Bogg Ministries, Therapeutic Riding Institute, K12 Gallery and Tejas, and The Kettering Backpack Program.  As part of the class project, students researched and then presented to a panel of community judges information about each charity’s mission and value to the community. 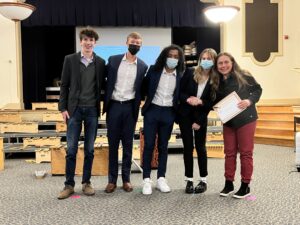 Judges evaluated the group presentations and then awarded a financial contribution, made possible thanks to the continued generous support of the Angela and Joel Frydman Philanthropic Fund, Johnson Investment Counsel, and Robert Wagner and family, to each group for their philanthropic organization.

This year, students representing the K12 Gallery and Tejas, and The Bogg Ministries were awarded the highest marks.

No comments to show.